Since visiting Paige in the literal dead of winter, I was dying to explore her new corner of the world in warmer weather. Earlier this summer, we spent a three-day weekend taking in all the best parts of eastern Mass, from Boston’s city lights to Rockport’s coastal charm – and a lot of places in between.

I spent most of Friday driving, arriving in the eastern part of Massachusetts just as the entire state headed toward Cape Cod. When I did arrive in Salem, Paige had an amazing dinner filled with fresh produce from the farmers’ market ready for me, which we enjoyed on her breezy second story porch.

After dinner, we caught the train into Boston for good beer, neon lights and a long walk through the city on a beautiful summer night. We met Tom, one of Paige’s friends from high school who now lives outside Boston as well, at Trillium Brewing Company’s Garden on the Greenway. I sipped on Peach Fated Farmer with Peach Juice, a sweet beer that went perfectly with the view of The Greenway and just a touch of a salty ocean breeze. We wandered through the city, around the harbor and on and off the Freedom Trail before catching the train. We headed back to Paige’s apartment for a good night of sleep before a day on the North Shore.

Because it was 5° last time I visited, I was looking forward to enjoying the wind coming in off the ocean, rather than dreading it. We started the morning in Swampscott, walking along King’s Beach, Red Rock Park and Nahant Beach. The sun was shining, the water was the perfect temperature for dipping our feet in, and we worked up enough an appetite to really, really enjoy our pizza from Volo Craft Pizza.

The restaurant was small but bright, with sun streaming in through the windows and reflecting off the stainless steel tabletops. Everyone behind the counter was incredibly sweet and our food (the House Pizza and a Panino Sandwich) was ready in just a few minutes. We headed back to Salem for a few hours out of the sun before driving up to Rockport. Our first stop was for coffee at Bean & Leaf, which has an amazing view of Rockport Harbor. We popped into a dozen shops before visiting the iconic Motif #1. Among our favorites along Bearskin Neck were Queen of Sorts, Wicked Peacock and Rusty + Ingrid Creative Company. 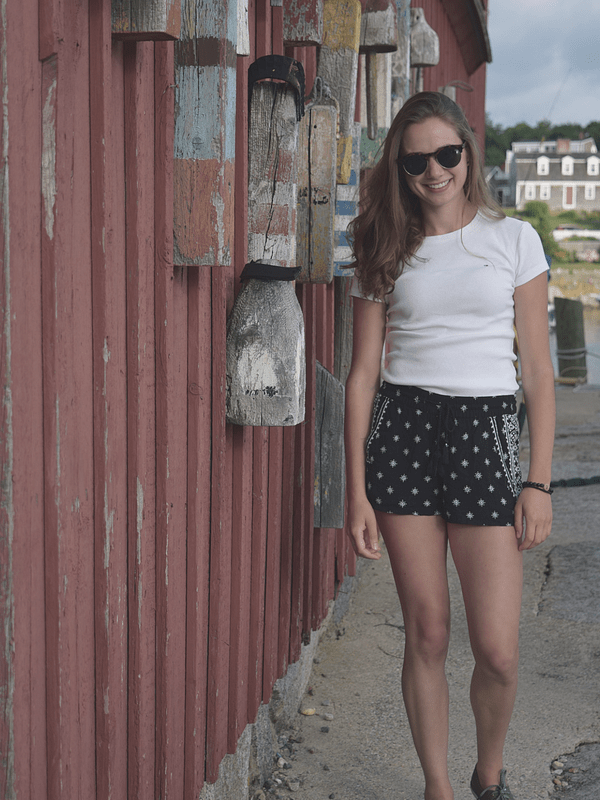 At this point, all we wanted were fish tacos, which are surprisingly hard to come by in this lobster-obsessed town, so we stopped for a quick dinner in Gloucester.

Sunday morning was gloomy, but that didn’t stop us from walking to Front Street Coffee House and peaking into Oak + Moss. We walked home through The Point to admire the gorgeous murals, all part of the mission of Punto Urban Art Museum to “break down the invisible, but undeniable socio-economic barrier between the Point Neighborhood and the rest of Salem and the North Shore… through stunning, world class art.”

Because of the rain, I left my camera at home during this outing. I’ve been kicking myself since, because this neighborhood’s art, from the full-scale murals to the small reminders that what goes down the storm drains will end up in the ocean, is stunning.

After our morning walk, I started the drive home, Volo leftovers in hand and ready to face the traffic waiting for me along the Mass Turnpike.

We managed to see a lot in just a couple of days, but I also put a big dent in a new book and got a few much needed good nights of sleep, making this the perfect weekend with my sister.

5 thoughts on “A Three Day Weekend on the North Shore”