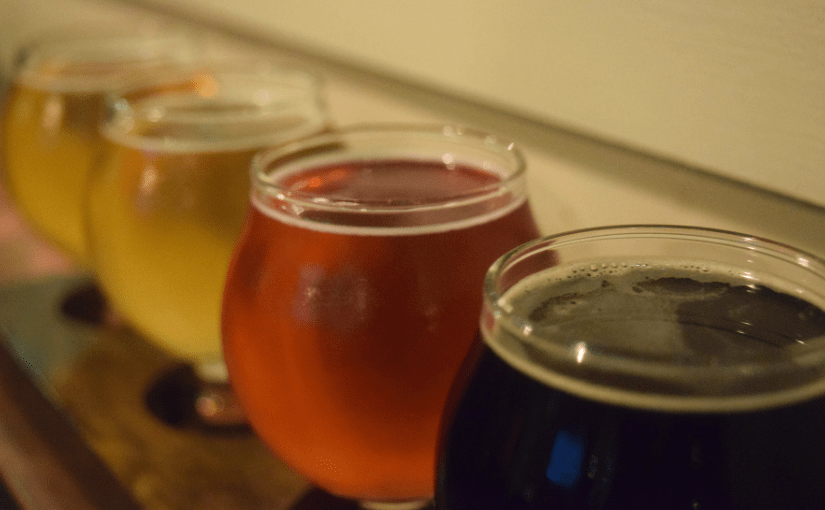 Every other year my dad’s family spends Thanksgiving in New York City, the huge metropolis both of my dad’s siblings call home. Hanging out with my cousins, catching up with aunts and uncles and reading the paper with my grandparents is a wonderful way to spend a long weekend. Every visit, we see a little bit more of what New York has to offer, from My Fair Lady at Lincoln Center (wayyy funnier than I expected) to the New York Transit Museum (trains are cool no matter how old you are). We almost never venture from Manhattan or Brooklyn, because the neighborhoods where my family lives have so much to offer.

This visit, we wanted to check out a couple of breweries, something Cody and I almost always do when traveling. As it turns out, nothing in Manhattan looked quite like the small taproom we usually gravitate towards. Of course, Brooklyn has a ton of options, but public transportation in the pouring rain after dark didn’t seem like that much fun. Long Island City was just a $7 Lyft ride over the Queensboro Bridge, so that’s where we ended up.

The businesses of Long Island City really like incorporating LIC into their names. This brewery did it well though, changing the spelling of Allis, the distinct generator their name is inspired by, to use the initials.

Just like good breweries everywhere, Big aLICe is in a nondescript industrial building. The bright green door opens into a small, cozy taproom with a little bit of a view of their brewing equipment. The atmosphere would remind Buffalonians of the original CBW space or Buffalo Brewing Company. We were greeted by lots of bartenders who knew what they were talking about, friends hanging out and a really cool (if not 100% accurate) map of breweries around the country. I chose a flight of 4 so I could try the Lemongrass Kolsch, NYS Pils, Hibiscus Gose, and Ways and Beans (a porter that I tried solely because of the name). Everything was great. I think the gose was my favorite, which is true of the last few breweries I visited. Cody opted for two IPAs, both of which even I liked.

Because it was still pouring rain, we took a 2 minute Lyft ride rather than walking to Fifth Hammer Brewing Company. I bet this place is really cool in the summer, with a big garage door that opens on to the street. The huge taproom here was a nice breath of fresh air after spending a few days in traffic, Fifth Avenue crowds and busy restaurants.

On the November night we visited, the one thing I couldn’t get over was how dark it was inside. I had to position my glass strategically over the Christmas lights in the corner to take a picture of it… My Cranorangutang (an American sour with cranberry and blood orange) was just sour enough to make it nice for sipping. Cody tried 2 of the IPAs, liking 1 enough to order it again rather than try the last IPA on tap.

We might not have been in Manhattan, but we were definitely still paying New York City prices at both breweries. Considering we drove down with my parents, ate at my aunt’s house most meals and spent the day walking, we weren’t too upset about spending $40 per brewery.

We finished the night with giant, cheap slices of cheese pizza at sLICe (I wasn’t kidding about the name thing), which tasted great. We headed back to Manhattan happy, full and ready to sleep a few hours before a loooong drive back to Buffalo.